Hwarimdonggyegok (Valley) is almost like a paradise that Geumcheon (Upper stream of Namgang), originated from Namdeogyusan Mountain (1,508m above sea level), flows to Seosang~Seoha and forms strange figure of rocks and swamps, then reaches to Nongwoljeong (Pavilion) to become jaded-clear water over solid rocks harmonizing with beautiful pine trees, and its distance is over 23km. Like its fame of the "Mecca of pavilion culture of Korea", on the wide and flat rocks around the valley are numerous pavilions and strange shaped rocks combined together.

When visiting Hwarimdonggyegok (Valley), from the direction of Geochang, Jinju and Namwon, you should come to Anui first, and from Muju, through Yukshipryung and come down toward Ahneui and visit.

Nongwoljeong (Pavilion) is full of solid rocks. Then the clear water flowing continuously over or besides numerous wide rocks…makes us exclaim regardless of out intention.

Nongwoljeong (Pavilion) is the place that Sir Myeongbu Park, who raised an army in Imjinwaeran(Japanese Invasion of Korea in 1592) and was killed gloriously at Jinjudaechup, stayed here and opened poetry club or fished leisurely.

Nongwoljeong is the pavilion that the next generation built for the memory of Sir Park, its name means "to seduce the moon", and we can guess the elegant entertainment of our ancestor from that name.

its landscape is so magnificent and it is appointed as national tour spot, recently our county is developing it for the convenience of increasing visitors.

On the upper part of the pavilion is juvenile training camp, this place is crowded any time of the year for juvenile's tour and training.

Beside the training camp is Hwangamsa, it is the shrine for tribute of the soul of folks and army that killed at Jungyujaeran to fight against Japanese. It is restored in 2001 by Hamyang-gun, we cannot help bow our head to our ancestor's spirit for patriotism.

Going 2km more there is Gyeongmojeong (Pavilion), at Hosung Village, Seoha-myeon. Gyeongmojeong is built in 1978 by the descendants of Bae Hyeongyeong, the hero of the foundation of Goryo. It has various swamps and wide rocks around, many visitors come to rest.

Going 1km more from here there is wide, small rocky island in the center of the stream, and on the opposite side Donghojeong (Pavilion) stands and looks down the rocks. Around the wide and flat rocks, there is deep blue pond where makes us absorbed and feel frightened.

Donghojeong (Pavilion) was built in 1890 by the descendants of the scholar of human nature, Man Ri Jang in King Seonjo of Joseon, which tributes for Sir Jang who had carried the king on his back and run away from Uiju to Shinuiju at Imjinwaeran. Afterward the king praised his loyalty and commanded to build a monument in front of the entrance of Hwangsan Village.

Throughout the year the Buddhists set free animals at this rocky stream and along the pine tree forest many visitors are camping here in summer season.

Behind the Donghojeong (Pavilion) and go forward 1km more, another beautiful scene spreads before our eyes. This named Geoyeonjeong Valley. Its meaning contains the mind of old Seonbi who wanted to live in the nature. Around the Geoyeonjeong (Pavilion) we can meet the huge trees growing through the rocks. Also the flowers between the cracked rocks here and there would not release the tourists' hurried steps, and all these are almost the picture of landscape which one pavillion places surrounded by the beautiful nature.

Geoyeonjeong (Pavilion) was built in 1613 by the descendants to tribute the achievements of Jeon Shisuk, the loyal retainer of Joseon, and we have to cross the arched bridge, Hwarimgyo, to reach to the pavillion, looking down the deep blue swamps and strange shaped rocks from the bridge make the pavillion more beautiful.

Gunjajeong, 50m down from the Geoyeonjeong was built by the descendants of Sir Jeong Yeochang , the scholar of human nature in King Seongjong of Joseon, and one of the five wise men of Joseon as well as one of the 18 wise men of East Asia to tribute him. Scholars used to sit here along the valley and exchanged their poets.

Besides these, we have numerous visiting spots such as endless landscape of the valley connects from Seoha-myeon to Baekjeon, Bujeon Valley of Seosang-myeon, Younggaksa (Temple)at the end of Namdeogyusan, and Deogyu Educational Center, so people visit here throughout the year. 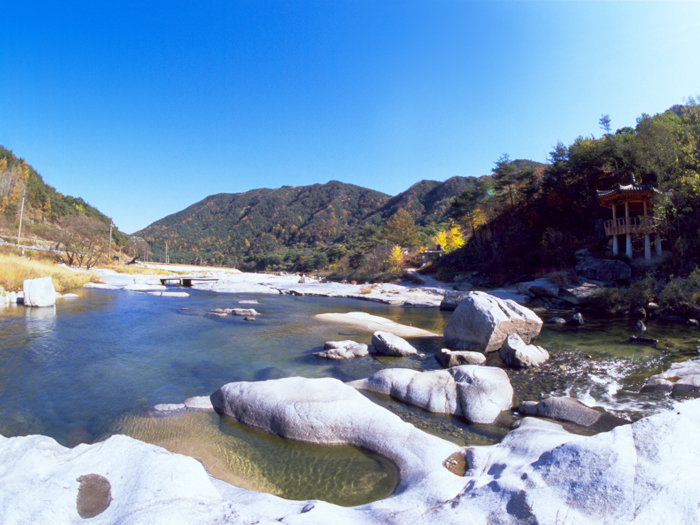